(A leading note: A discussion on changes to the welcome message is currently still open but has had its announcement preempted by one for this thread.)

Wanna talk about the sequel? You can do it in this thread! (You could technically make your own thread but I figured post-release thoughts could all be organized in a place like this.) Since this is post-release... spoilers may abound in this thread!

I just saw it tonight (technically before its "real" release date), and it was wonderful. It wasn't perfect, but I definitely enjoyed it. I shared some more in-depth thoughts here on my Tumblr blog.

What did you think of Ralph Breaks the Internet?

I generally have similar feelings (in reference to your tumblr post). I liked this film a lot, but it (and its credits) didn't floor me the way the first movie did. Maybe it's because I have a lot of love for the arcade setting and lore, and not the internet. Still a great film though.

I only have two real gripes: the first is the sore absence of Felix and Tamora. I know something had to be cut since the crew had so many storyboards, but damn that was a massive letdown. Those two are returning main characters, second only to Ralph and Vanellope, and yet they have less screentime than the cameos. You can tell they were supposed to have a whole arc (and they show up in the Main Characters sections at the beginning of the credits, both "animated" and text-scrolling) but man, what ended up happening to their storyline was sad. I hope we get the deleted scenes on home release, or (if pigs fly) a Director's Cut edition.

Second complaint is: I really wish the princesses didn't get the glory scene with saving Ralph. It just felt cheap and unnecessarily show-offy to have cameos do that, since it's not their movie, and they already get to be heroes and have plenty of exposure in their own material (I mean, imagine if Sonic and Bowser just showed up out of nowhere and saved Ralph from the volcano instead of Vanellope). It would've been great if Shank and her crew saved him, since he didn't like her much, and it would bring their interactions full-circle to a point of mutual respect.

Other than that, I think this was a pretty damn good movie, all things considered. Ralph and Vanellope's wonderful friendship is on full display, and I fell apart when she said she loved him. The reprisal of Ralph's Theme in important scenes really drove the emotions home. The few scenes Felix and Tamora did get were very sweet, and everything involving Zangief was hilarious.

(I didn't mean to come off so negatively, you just covered most of the positive things in your post so I didn't want to repeat everything :P)

Lol, The princesses have a second appearance in the movie? And over to save Wreck-It Ralph from his suicide? Oh no, the shippings of between Ralph and each princess will be much more frequent than ever (especially with Elsa), I already imagined that this would happen in the movie, since they came to be seen.

(Why Jasmine didn't get the genie to defeat the virus?) 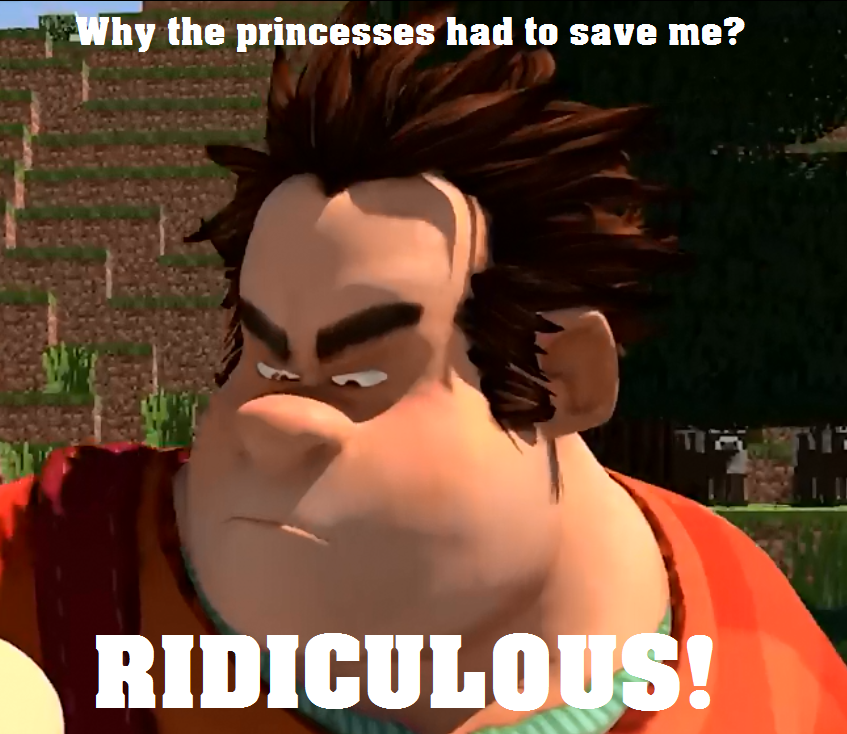 Gasp, the cameos saving the day instead of Shank or someone else *was* a problem with that scene, looking back! I think my brain was trying to get at that with the bit I said in my Tumblr post about Bad-Anon being better connected to the first movie's story. The Princesses fit into the movie on some level (in a way that you could tell they thought about it instead of just shoving them in for money grabs), but not the way Bad-Anon did with the first.

A Director's Cut would be awesome, though I do also believe it won't happen. I am glad that it felt like Felix and Calhoun shone on some level when we *did* see them.

(My friend actually said the Choose Your Own Adventure book apparently has what feels like a lot of cutting-room-floor sorts of scenes.)

The new movie so far seems to be really cool. I like the details included in it, like including all Disney princesses, and more gaming characters. Also, seeing the Internet becoming some sort of physical setting looks pretty cool, in my opinion, though I hope it won't mimic the style of the godawful emoji movie.

The year when it was released, back in 2012, as a 9 year old back in the day, I found it as an awesome and pretty unique movie, and it's probably one of the best movies I've ever seen, not to mention that I already watched the first movie at least 20 times with no exaggeration. Now I'm 15 and I still love the series. Looking forward to watching it on the weekend!

More gaming characters? but if it have practically the same cameos as the first movie (except Bowser & Mario), On the Internet there are no more of these, just winks from Fornite, Mario Blocks & Zelda Triforce.

I think JustLeafy may be talking about the couple of new fictional games we see in the Internet.

And they are only two, Slaugther Race as the game from main story and Pancakes & Milkshakes as the game of Post-credits.

What do you think?