1011001 is a yellow robot with a buzzsaw for one hand and a clamp for the other. 1011001 has red eyes and a black combined nose/mouth plate. It has three silver spikes on the sides of each of its arms. It has two black pipes emerging from each of its shoulders.

It supposedly comes from the game Cyborg Justice, since its appearance is very similar to the character Saw-Hand from that game.

It is one of the many villains at the Bad-Anon meeting and sits between Clyde and Sorceress. 1011001 has no speaking roles in the movie; instead, it uses its buzzsaw to show its approval. 1011001 can be seen walking around Game Central Station in a few scenes of the movie.

Additionally, 1011001's cameo caricature can be seen on the wall at Tapper's.

The caricature of 1011001 that appears in Tapper's, art by Bobby Pontillas 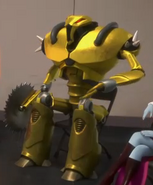 1011001 and the others listening to Zangief's story

Add a photo to this gallery
Retrieved from "https://wreckitralph.fandom.com/wiki/1011001?oldid=99997"
Community content is available under CC-BY-SA unless otherwise noted.