Bentley Bear is a character who makes a cameo appearance in Game Central Station and at the 30th anniversary party in Niceland. He is seen mingling with the other guests. He is a character from the game Crystal Castles by Atari.

Bentley Bear is a very short animal that resembles a teddy bear. He carries a satchel and wears a floppy green hat with a red feather. He has some hair hanging out the front of his hat, red boots with a white bottom, and he has blue eyes.

Not very much is known about Bentley Bear's personality in the movie, but in his game he is friendly. He also appears to be scared when Wreck-It Ralph smashes the cake as seen by the look on his face. 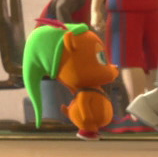 Bentley as he appears in the movie

Community content is available under CC-BY-SA unless otherwise noted.
Advertisement