Bowser is the main antagonist of the Super Mario Bros. video game series. He makes a cameo appearance in Wreck-It Ralph as a part of the Bad-Anon villains support group.

Bowser is a huge, yellow, burly, green-shelled Koopa with spikes, horns, and red hair. His bushy eyebrows and mane are fittingly a bright, fiery red-orange and he has bright red eyes. He sports two small horns, many spikes on his shell with brown-orange spike-rings, as well as along his tail (minus the spike-rings). He wears several spiked collars around his neck and arms. He has three claws on each of his massive feet, which support his impressive girth. He has three claw-tipped fingers and a thumb on each hand, and his arms are noticeably burly, indicating his vast physical strength. While his face and his shell are green, his underbelly and snout are flesh-colored, and his tail and limbs are an orange-tinged yellow.

As mentioned above, Bowser is a member of the Bad-Anon support group. When Wreck-It Ralph expresses interest to not be a bad guy anymore, Bowser reacts in shock by breathing fireballs. 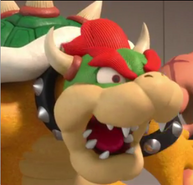 Bowser in an earlier screen rendering 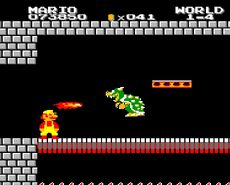 Bowser in his game

Bowser at Bad-Anon, by Dan Cooper 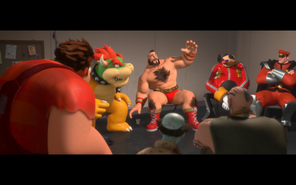 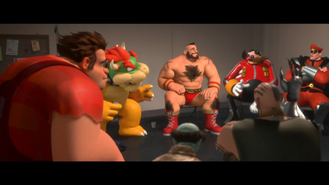 Bowser and the others listening to Zangief's story

Bowser and the other members leave Bad-Anon 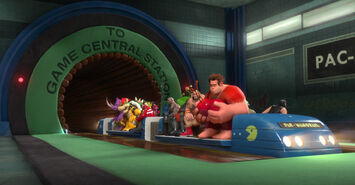 Retrieved from "https://wreckitralph.fandom.com/wiki/Bowser?oldid=100024"
Community content is available under CC-BY-SA unless otherwise noted.