Out of the four new challengers, Cammy is by far the most prominent, having many more game appearances than the others, as well as more appearances in games and other media than many of the original "world warriors". Along with Chun-Li, Cammy's considered one of the Femme Fatales of the Street Fighter universe, her popularity quickly making her one of the most famous characters, because of her attractive and slender figure along with her strong personality and fighting skills.

Cammy along with Chun-Li

Cammy in a crowd at Game Central Station 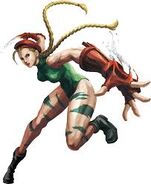 Retrieved from "https://wreckitralph.fandom.com/wiki/Cammy?oldid=96491"
Community content is available under CC-BY-SA unless otherwise noted.