"As bad guys, we've all felt what you're feeling, Ralph, and we've come to terms with it. Now, let's close out with the Bad Guy Affirmation"
―Clyde

Clyde is one of the four ghost enemies from the Pac-Man video game series. He runs the weekly Bad-Anon villains support group which is located in the ghost pen of the game Pac-Man. He is seen floating around when the other members of Bad-Anon leave his game.

Clyde is a round, orange ghost with large, light blue eyes. He has a small mouth and the base of his body billows around him as he hovers, giving him his ethereal and ghostly appearance. When he's upset (or when Pac-Man eats one of the Power Pellets in his game), his body goes rigid, turns a bright blue, and his facial features turn ghostly white with a grimace.

Clyde: Orange and Finally in Charge 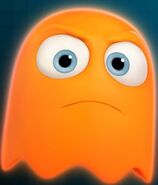 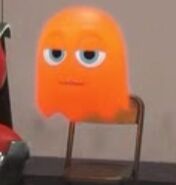 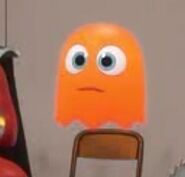 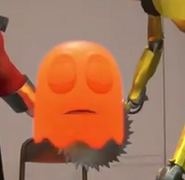 Clyde at Bad-Anon, by Dan Cooper

Clyde and the others listening to Zangief's story

Clyde's meeting with the others is over

Clyde's meeting with the others is over 2

Clyde and his fellow comrades make a cameo 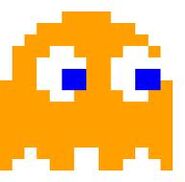 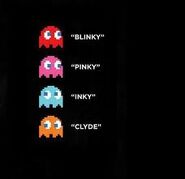 Clyde in the credits

Retrieved from "https://wreckitralph.fandom.com/wiki/Clyde?oldid=99541"
Community content is available under CC-BY-SA unless otherwise noted.