"You can't mess with the program, Ralph!"
―Cyborg

Cyborg is a character in Wreck-It Ralph. He appears in the film as a part of the Bad-Anon villains support group. The character is very clearly Kano from the Mortal Kombat series. The credits call him "Cyborg” most likely as a way of avoiding a direct reference to a franchise that targets an older demographic compared to the ‘’Wreck-It Ralph’’ film.

Cyborg is a brawny, powerfully-built man who, as his name implies, appears to be half robot. While the left side of his body is human, the majority of Cyborg's right side is robotic. On his left side, he has a green, human eye and a muscular arm decorated in tribal tattoos. On the right of him, he has a powerful artificial arm and a glaring, bionic red eye. Cyborg wears many gold chains around his neck and more metallic ones around his wrists and belt. He has small hoop earrings and boasts a dark mustache and beard.

Cyborg is a member of the Bad-Anon, the villain support group Ralph attends. His most memorable scene is when he rips out Zombie's heart (Kano's famous Fatality) to emphasize the point his fellow member was trying to make. When Ralph states that he doesn't want to be a bad guy anymore, the Cyborg is among the villains that reacts to this as he quotes "You can't mess with the program, Ralph." He also has a caricature portrait at Tapper's and is seen around Game Central Station in a few scenes. He makes his final appearance during the epilogue at the Bad-Anon meeting. 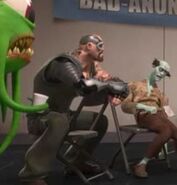 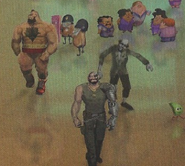 Cyborg at Bad-Anon, by Dan Cooper

Cyborg and the others listening to Zangief's story

Cyborg rips Zombie's heart out of his chest

Cyborg in the credits
Add a photo to this gallery
Retrieved from "https://wreckitralph.fandom.com/wiki/Cyborg?oldid=100109"
Community content is available under CC-BY-SA unless otherwise noted.