Dr. Brad Scott was a scientist working in the Research Lab of Hero's Duty and the fiancé of Sergeant Calhoun. He was killed and eaten by Cy-Bugs as the two were exchanging their vows at the altar.

Prior to the movie, Brad was Calhoun's fiancé. He had given her the nickname "one dynamite gal", which he constantly used throughout their relationship. This caused mental trauma to Calhoun in the future, as for example when Fix-It Felix says "dynamite gal" to her.

Scott and Calhoun were originally supposed to be married, but at the wedding Scott was eaten by a Cy-Bug although Calhoun attempted to save his life. However, Brad had already fused with the Cy-Bug before Calhoun could save him. The loss of her love led Calhoun to harden her heart so she would not have to undergo the same pain again. It is unclear whether Dr. Brad Scott was an actual character in the game Hero's Duty or if he was merely part of the backstory Calhoun was programmed with.

"You're one dynamite gal."

Calhoun & Scott's reaction as a Cy-Bug crashes their wedding 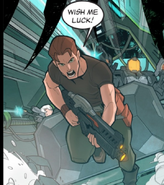 Retrieved from "https://wreckitralph.fandom.com/wiki/Dr._Brad_Scott?oldid=99548"
Community content is available under CC-BY-SA unless otherwise noted.