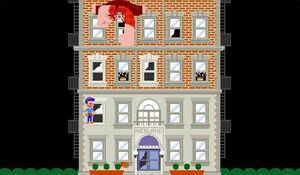 Fix-It Felix, Jr. is a platformer game in the Wreck-It Ralph universe. It takes place in Niceland, where Ralph, Felix, several Nicelanders, and Q*bert characters live.

It was created by TobiKomi.

"Fix-It Felix, Jr. was one of the most popular 2D platform games ever made. Launching in 1982, it became a pop culture sensation thanks to its colorful 8-bit graphics, simple controls, and addictive gameplay."

At the beginning of a game, Ralph climbs up the apartment building, breaking windows as he goes. It is the player's job—as Felix—to repair each window with his magical hammer, while avoiding bricks that fall off when Ralph punches, and Duck Hunt-inspired ducks that fly horizontally across the screen at random. On some screens, if the player waits long enough, a Nicelander will appear in a window to drop off a pie which Felix can collect for a period of invincibility, faster fixing power and other effects depending on the version of the game.

As the game progresses, the enemies become more numerous and faster, and there are more windows to repair. What's more, Ralph will smash and break windows that the player has already repaired, forcing Felix to go back and fix them. Higher levels introduce rather increasing numbers of randomly-placed obstacles such as purple flowerbeds which prevent Felix from jumping up or down between two windows. The versions made available online also feature open window shutters for blocking Felix horizontally, while the arcade version instead has a number of large piles of bricks fall between two windowsills and get stuck starting in the fifth round. Felix can jump over these brick piles to get across the row, but they will kill him if he steps into them or jumps into them from below.

The story of the game is that Ralph is destroying Niceland Apartments in retaliation for the Nicelanders bulldozing his hollow-stump home in the forest to build their apartment building and leaving him in the town dump. When Felix fixes every window on the screen, Ralph climbs higher and reveals more floors of broken windows. When Felix fixes the highest screen (with the penthouse visible on the arcade version), a cutscene plays where the Nicelanders join Ralph and Felix on the roof and award Felix a medal (which floats down from behind a pair of parting clouds), a pie, and a kiss on the cheek. The Nicelanders then lift up Ralph and hurl him off the building into a mud puddle. Finally, Ralph comes back to try again in a new level.

There are two online versions of the game: an unlimited version as found on the Disney.com games section, and an alternate version with a time limit as found on the movie website. Gameplay is generally the same in both versions, with the only notable differences being time, gameplay music, level structure, the lack of some sound effects in the time-limited version, and the screen quality (in the use of a scanlines-filter).

The movie website version was once marked as a "beta code" version.

If the player presses the pause button just after fixing the final window on a level, the 'You fixed it!' message will pop up, but during the cut-scene where Ralph is thrown off of the roof, the 'PAUSE' label will pop up. When the next level is started, the game will pause. Even after pressing the pause button, the 'PAUSE' label will stay onscreen, obscuring the windows and making it difficult to see which are broken and which are fixed.

There are two ways to perform this glitch. When the glitch is performed, the game can't progress, regardless of  the fact all windows on the current floor have been fixed. Ralph will continue to throw bricks and Felix can still be moved, but the game will stay on the current floor. One way of performing this glitch is to 'die' just as the last window on the floor is fixed. The second way to perform the glitch is to press the fix button on a window and have Ralph wreck the window while it's being fixed. 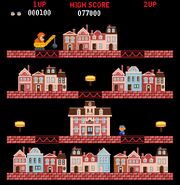 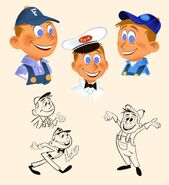 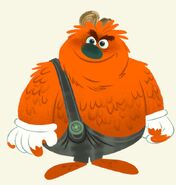 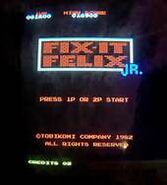 Retrieved from "https://wreckitralph.fandom.com/wiki/Fix-It_Felix,_Jr._(game)?oldid=101317"
Community content is available under CC-BY-SA unless otherwise noted.