Frogger is the protagonist of the game Frogger. He is seen only in Game Central Station, as he is hopping away from Ralph in fear.

Frogger is a green frog with red eyes, with no irises, and orange feet.

Frogger is an arcade game introduced in 1981. It was developed by Japanese video game company Konami, and licensed for worldwide distribution by Sega/Gremlin. The object of the game is to direct frogs to their homes one by one. To do this, each frog must avoid cars while crossing a busy road and navigate a river full of hazards. Skillful players may obtain some bonuses along the way.

The game is regarded as a classic from the golden age of arcade games and was noted for its novel gameplay and theme. It was also an early example of a game using more than one CPU, as it used two Z80 processors.

A picture of Frogger at the Tapper bar.

Frogger in his original game. 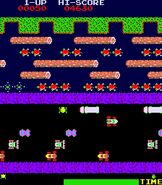 Frogger in his original game. 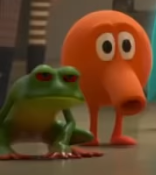 Q*Bert & Frogger in Ralph Breaks the Internet
Add a photo to this gallery
Retrieved from "https://wreckitralph.fandom.com/wiki/Frogger?oldid=97270"
Community content is available under CC-BY-SA unless otherwise noted.