Alive
General Hologram, also known as General Lockload, is a character in the 2012 feature film, Wreck-It Ralph. He is voiced by Dennis Haysbert.

General Hologram: Man with a Medal
"General Hologram is the consummate soldier: He is bold and distinguished, serious and professional. Tapped to stand sentinel over the ultimate prize in Hero's Duty—the coveted Medal of Heroes—General Hologram is honored to bestow the medal to anyone who is skilled enough to make it to the top of the 99-story tower."

General Hologram is a character in the arcade game Hero's Duty, a first-person shooter game. His purpose in the game is to award the Medal of Heroes to the successful player that makes it to the 99th floor of Hero's Duty tower. He also serves as the game's narrator for the opening scene.

A hologram of the general appears when Ralph breaks into Hero's Duty Tower and earns the Medal of Heroes. The hologram congratulates Ralph as the Bad Guy accidentally hatches a Cy-Bug egg. The newborn bug then attacks Ralph and sends him on an escape shuttle that leads them to Sugar Rush. The real General Hologram returns at Fix-It Felix, Jr. and Sergeant Calhoun's wedding.

A scrapped part of the storyline was the original inclusion of General Lockload, the General who appears in front of Ralph as a giant hologram congratulating him on winning the Medal of Heroes. In an earlier draft of the story, Hero's Duty was going to have more screen time, with Ralph experiencing the hard-life of the military by being transferred into KP duty serving slop in the cafeteria and getting thrown to the brig. After that, Ralph was put into demolition duty since the unit found out Ralph was good at destroying things. General Lockload was the General of the unit and Calhoun's boss. He wore the Medal of Heroes around his neck 24/7 to show his pride. In the middle of the entire stay at Hero's Duty, General Lockload gets injured in battle (presumably from Ralph's clumsiness). Lockload gets put into Sickbay with injuries completely surrounding his body in a comical fashion. In this state, Ralph was able to sneak past Lockload and steal his medal right off him. After a complete story redesign that gave Hero's Duty less screen time and made it focus more on the video game aspect instead of life inside a military base, General Lockload was scrapped. 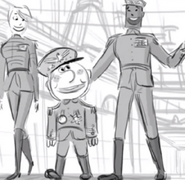 An early concept of General Lockload in a deleted scene.

General Hologram as he appears in the 8bit credits.

Português do Brasil
Community content is available under CC-BY-SA unless otherwise noted.
Advertisement