"Ah, just a heads-up, Felix, they're bringing out the cake in a few shakes."
―Glenn

Glenn is a turtle from Frogger that appears in Wreck-It Ralph. He makes a small cameo appearance when Felix is talking with Ralph. He informs Felix that they are about to bring out the cake at the 30th anniversary party of his game, Fix-It Felix, Jr. When Glenn sees Ralph, however, he gives Ralph a disapproving look, and then quickly shuts the door.

Glenn as he appears in Frogger. 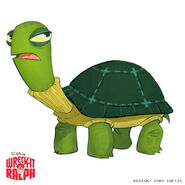 The possible earlier version of Glenn

"Hey, Felix, just a notice, they're bringing out the cake in a few shakes."

Old version of Glenn can be found on the scene where the Surge Protector stops Ralph after exiting Pac-Man for a random security check.
Add a photo to this gallery
Retrieved from "https://wreckitralph.fandom.com/wiki/Glenn?oldid=95280"
Community content is available under CC-BY-SA unless otherwise noted.