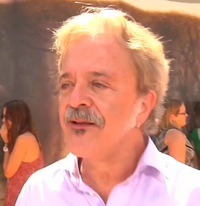 Jim Cummings is an American actor and singer who has appeared in almost 400 roles. He is the voice actor for Dr. Eggman (from Sonic the Hedgehog) and provides other additional voices (such as the announcer in the Kart Bakery) in Wreck-It Ralph.

Just a few of his other Disney roles include Winnie the Pooh and Tigger from 2011's Winnie the Pooh, Ray from The Princess and the Frog, Kaa from The Jungle Book II, Taz from Looney Tunes, and Pete from the Three Musketeers, and Kingdom Hearts II.

Retrieved from "https://wreckitralph.fandom.com/wiki/Jim_Cummings?oldid=98896"
Community content is available under CC-BY-SA unless otherwise noted.