King Candy's Castle was the home of Turbo while he was disguised as King Candy in Sugar Rush. It was where he and his diminutive sidekick, Sour Bill lived. It is guarded by Oreo guards. It is now the home of President Vanellope von Schweetz, until she left the game and moved to Slaughter Race.

The exterior of the castle is magnificent and a dazzling white, pearline color. It seems to be made of frosted shortbread, and the rising towers appear to be topped with merengues. At the front of the castle, there is a tall, ornate archway. The castle sits on a wooded unicorn-pop hillside, and is accessible only by passing a long, cookie wafer bridge, which leads to the castle's front door. This bridge spans over a great valley surrounded by candy-glazed hills.

The interior of King Candy's castle is made of pink (although King Candy insists that it's salmon) ribbon-like candy. The throne room has a high ceiling and stained glass windows that can only be assumed to be made of hard candy. One of the most interesting features of King Candy's castle is his dungeon, in which he calls a "Fungeon". Inside it, there is a  "Glitch-Free" room, made specifically for Vanellope.

The castle from the inside

Felix knocking on the castle door.

The entrance to the code space 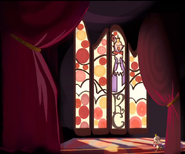 The flat render of the castle by Ryan Lang.

A huge panel in Code Space, Along with King Candy
Community content is available under CC-BY-SA unless otherwise noted.
Advertisement