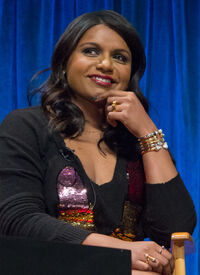 Vera Mindy Chokalingam[1] (born June 24, 1979),[1] known professionally as Mindy Kaling, is an American actress, comedian, and writer. She provides the voice for Taffyta Muttonfudge (a racer in Sugar Rush)  in Wreck-It Ralph. From 2005 to 2013, she played Kelly Kapoor in the NBC sitcom The Office. In addition to acting in it, she was a writer, executive producer, and occasional director.[2] Recognitions for her work on The Office include a Primetime Emmy Award nomination for Outstanding Writing in a Comedy Series in 2010.

Kaling gained wider attention for creating, writing, producing and starring in the Fox/Hulu comedy series The Mindy Project (2012–2017). In 2018, she began serving as the co-creater, writer, and producer for the sitcom Champions, in which she also has a recurring role.[3] Kaling also provided the voice for Disgust in the 2015 Pixar film Inside Out; other film credits include starring roles in the fantasy adventure A Wrinkle in Time and the heist-comedy Ocean's 8 (both 2018).

In addition to her work on film and television, Kaling has written two New York Times best-selling memoirs, titled Is Everyone Hanging Out Without Me? (2011) and Why Not Me? (2015).[4]

Retrieved from "https://wreckitralph.fandom.com/wiki/Mindy_Kaling?oldid=95383"
Community content is available under CC-BY-SA unless otherwise noted.