Moppet Girl is a young girl and apparent frequent patron at Litwak's Arcade. She is first seen playing Hero's Duty right after Ralph enters the game to win a medal. After she loses (thanks to Ralph's interference), she wanders through the arcade and tries to reserve the next game of Sugar Rush. However, the boys playing the current game snub her and explain they intend to play all nine racers in the roster.

Disappointed, she then heads to Fix-It Felix, Jr. and is the first person to notice Ralph's absence. She tells Mr. Litwak, and he puts Fix-It Felix Jr. out of order. In King Candy's fantasy explaining why Vanellope cannot race, she is the one playing Sugar Rush and running to Mr. Litwak to get the game unplugged when she thinks the game is broken because of Vanellope's glitching. At the end of the film, she is seen racing and winning as Vanellope; she gives Vanellope a fist bump after they win. She is voiced by Stefanie Scott.

Moppet Girl is a young girl with shoulder-length blonde hair, pink glasses, a red headband, and slight gap in her front teeth. She wears a violet floral T-shirt under a pink sweater with red sleeves, along with blue leggings, white ankle socks, and grey sneakers with a purple stripe. Moppet Girl has fair peach skin, blue eyes, rosy cheeks, and an upturned nose.

Moppet Girl denied the next game of Sugar Rush.

Moppet Girl as she appears in the Golden Book adaptation. 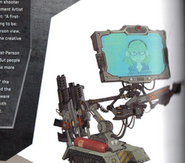 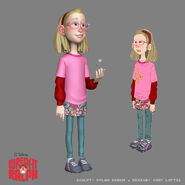 Add a photo to this gallery
Retrieved from "https://wreckitralph.fandom.com/wiki/Moppet_Girl?oldid=100458"
Community content is available under CC-BY-SA unless otherwise noted.