Neff is a wizard who often takes a large, armored, purple rhino form. He is from the Altered Beast video game. In Wreck-It Ralph, he appears in his rhino form and attends the Bad-Anon villains support group.

"As Altered Beast's resident evil wizard, Neff is a natural for the Bad-Anon meeting roster."

Neff's rhino form appears as a member of Bad-Anon. When Ralph states that he doesn't want to be a bad guy anymore, Neff is among those who reacts to this, and he is comforted by Sorceress.

Neff is a wizard that is disguised as a large, purple rhino with golden shoulder pads, shin guards, and gauntlets. As normal rhinos do, Neff has two horns on his nose (one larger than the other). Neff also has three toenails and fingernails on each of his hands and feet.

Neff's picture, as seen in the video game celebrity wall at Tapper's 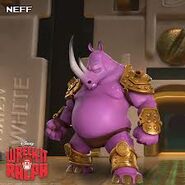 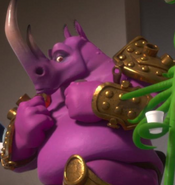 Neff as he appears in Altered Beast

Neff at Bad-Anon, by Dan Cooper

Neff and the others listening to Zangief's story

Neff boarding the Pac-Manorail to Game Central Station
Add a photo to this gallery
Retrieved from "https://wreckitralph.fandom.com/wiki/Neff?oldid=100114"
Community content is available under CC-BY-SA unless otherwise noted.