Ostrich is a character in Wreck-It Ralph. He is from the game, Joust. He is seen flying and landing in Game Central Station with a Knight on his back, just like in his home game. Unlike his appearance in the game Joust, which is an actual ostrich, he looks similar to a dragon or other reptile. 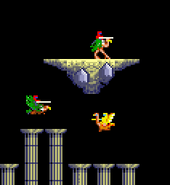 Ostrich in his game.

Community content is available under CC-BY-SA unless otherwise noted.
Advertisement