Start a Wiki
Peter Pepper is one of the many video game characters that made cameos in the film Wreck-It Ralph. He is from the 1982 arcade game, Burger Time. The goal in his game is to put peppers and eggs in a giant hamburger that he prepares.

A picture of Peter Pepper, as seen in the Tapper bar.

Peter Pepper in the Tapper bar. 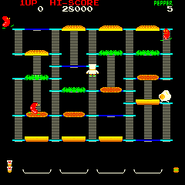 Peter Pepper in his original game.
Add a photo to this gallery
Retrieved from "https://wreckitralph.fandom.com/wiki/Peter_Pepper?oldid=95238"
Community content is available under CC-BY-SA unless otherwise noted.