RoadBlasters was the second racing game ever introduced in Litwak's Arcade, later succeeded by Tobikomi's Sugar Rush in 1997. Turbo game-jumped to it and attempted to take the game over out of jealousy and spite. When the problem was discovered by the humans playing in the arcade, both Turbo's game and RoadBlasters had their plugs pulled permanently.

RoadBlasters was probably a big success, as it seemed what Turbo did was so drastic it would seem as if no one even glanced at his game anymore.

Roadblasters appeared to be a 2d sprite on a flat 3d world, as most mid-late 80's games consisted of.

However in real life, RoadBlasters is an arcade game released by Atari Games in 1987. In RoadBlasters, the player must navigate a sports car through 50 different rally races, getting to the finish line before running out of fuel. 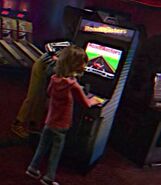