Slick is one of the antagonists in the game Q*Bert. He can be seen by the entrance of Fix-It Felix, Jr.'s entrance plug, right beside Coily in the beginning of Wreck-It Ralph in Game Central Station. He and the other Q*bert characters took residence in Game Central Station after their game was unplugged. He is Sam's older brother.

Slick is a small green gremlin that wears sunglasses. However, since he is gameless, one of the lenses on his sunglasses is broken.

In the ending of Wreck-It Ralph, Q*bert and his enemies (including Slick) help out with the new "Bonus Levels" in the game Fix-It Felix, Jr.

Slick and Sam are considered antagonists in that they revert cubes to their original colors by jumping on them, thus undoing Q*Bert's work at changing all cubes to a certain color to complete the pyramid and the stage.  Unlike the three other antagonists, Slick and Sam cannot harm Q*Bert, yet Q*Bert can stop Slick from his color-changing mischief by jumping on him, earning 300 points in doing so.

Slick and Sam's picture at Tapper's 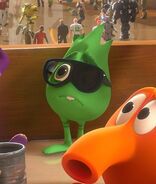 Slick as he appears in the movie

Slick and his comrades are left homeless.

Peter Pepper offers Slick and his companions some food.

Slick, with Sam and the rest of the cast, depicted on the original Q*Bert arcade cabinet.

Slick, Sam and Q*Bert being threatened by Coily's gang in the 2005 remake.
Add a photo to this gallery
Retrieved from "https://wreckitralph.fandom.com/wiki/Slick?oldid=99603"
Community content is available under CC-BY-SA unless otherwise noted.