"If you leave your game, stay safe, stay alert, and whatever you do, don't die! Because if you die outside your own game, you don't regenerate. Ever! Game over."
―Sonic's PSA message

Sonic the Hedgehog is the titular protagonist of the Sonic the Hedgehog video game series and the official mascot of SEGA. He makes appearances in Wreck-It Ralph, and was heavily featured in promotional items prior to the film's release. Sonic is featured in Public Service Announcements aired around the Game Central Station, where he reminds the crowd to stay safe when outside of their own game. This is because characters that die elsewhere do not regenerate, as a result of being alien to the programming codes, but not only that, he also reminds the crowd the possible dangers of entering neighbor games. During his free time, Sonic is seen loitering around the hub frequently and is also known to be around other games such as Fix-It Felix, Jr. during the 30th anniversary party. Sonic is a large cream and dark blue hedgehog with large green eyes, and a black nose. He wears white gloves and red shoes with a horizontal white streak.

"When this hero who moves at the speed of sound is not busy saving the world in his own video game series, Sonic the Hedgehog slows down to make public service announcements reminding his arcade game colleagues to stay safe — especially when outside their own games."

Sonic makes multiple appearances during the events of Wreck-It Ralph, and also in the sequel Ralph Breaks the Internet.

Another artwork of Sonic. 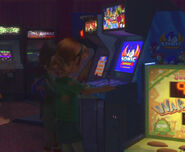 Sonic on the arcade cabinet.

Sonic on the PSA board.

Sonic talking to a turtle in Game Central Station.

Sonic drops his golden rings after being hit by Ralph's escape pod.

Sonic at Felix and Calhoun's wedding

Ralph, Vanellope and Sonic in the credits

Sonic and Dr. Eggman in the credits.

Sonic on a poster for Wreck-It Ralph. 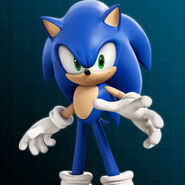 Sonic with his partner Tails in Chemical Plant Zone in Sonic the Hedgehog 2 (note the similarity to Sonic during the credits).

Sonic in Ralph Breaks the Internet

Sonic with book in Ralph Breaks the Internet

Sonic, Ralph & Q*bert in the Book Club
Add a photo to this gallery

Retrieved from "https://wreckitralph.fandom.com/wiki/Sonic_the_Hedgehog?oldid=106146"
Community content is available under CC-BY-SA unless otherwise noted.