Sorceress is a minor character in the movie, Wreck-It Ralph.

She appears at the Bad-Anon villains support group (as its only female member), seated between Neff and 1011001. When Wreck-It Ralph expresses his interest to not be a bad guy anymore, she is among those who react to this with shock.

Sorceress has light blue skin with long pointed ears and crimson red lips and eyes. Her hair is long and a deep blue, with side bangs falling over her right eye. Sorceress is tall and voluptuous, with wide hips and a slim waist, giving her an hourglass figure. She wears a red Victorian-style dress with a sweetheart neckline sitting low on her bosom, and it has thigh-high slits in the front of the dress. She wears matching red opera gloves with white cufflinks and russet, knee-high platform stiletto boots. She tops off her ensemble with a white collar and diamond-like pendant around her neck, dark blue eye shadow, and crimson, manicured nails.

She has a caricature picture at Tapper's, and appears floating around the Game Central Station in a couple of scenes. She also makes a brief appearance during the epilogue as one of the guests at Felix and Sergeant Calhoun's wedding. 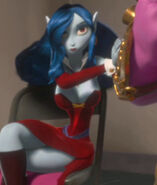 Sorceress at Bad-Anon, by Dan Cooper

Sorceress and the others listening to Zangief's story

Sorceress and the others leaving Bad-Anon

Sorceress and the others leaving Bad-Anon 2

Sorceress among the wedding guests, in the fifth row 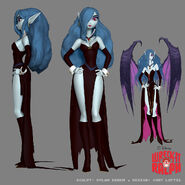 Sorceress' picture at Tapper's
Add a photo to this gallery

Retrieved from "https://wreckitralph.fandom.com/wiki/Sorceress?oldid=98874"
Community content is available under CC-BY-SA unless otherwise noted.