Taizo Hori (also known as Dig-Dug) is the protagonist in the Dig-Dug video games. In Wreck-It Ralph, he is seen in Game Central Station walking. However, he quickly digs away in fear as soon as he sees Ralph.

Taizo is a small blue man who wears a red and white helmet and jumpsuit with red boots. He has large black eyes. He carries a red shovel that he uses to quickly dig.

Taizo the first driller in his home town, where everyone knows Taizo is a White-Striker. His digging is similar to an earthquake breaking the ground. Taizo married Masuyo Tobi and they had three sons (Susumu Hori, Ataru Hori, and Taiyo Tobi), but they divorced for unknown reasons. Taizo is the chairman of the Driller Council.

In 1982, Taizo solved the "Dig Dug incident" caused by Pookas and Fygars, and some time later the problem in the tropical islands that happened in Dig Dug II. Afterwards he was treated as a hero.

In Taizo's appearances in the Mr. Driller games as a playable character, he "pops" blocks faster than the other characters, but his air gauge decreases fast so he must drill aggressively to find air capsules more quickly.

In Dig Dug: Digging Strike, Taizo is jealous of Susumu receiving all the attention as he was the first Driller. When he received a call from Horinesia to ask for help from Susumu, Taizo said he could help with it, but as the person never heard of him and insisted to talk with Susumu, he got angry and decided to do the job himself. 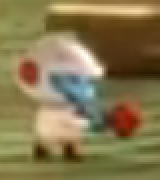 Dig Dug's sprite in the game 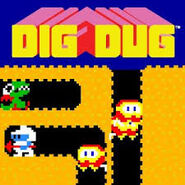 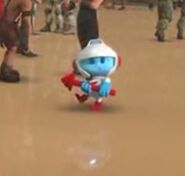 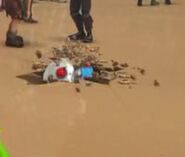 Taizo digging away from Ralph

Tazio Hori Killing a Pooka
Add a photo to this gallery
Retrieved from "https://wreckitralph.fandom.com/wiki/Taizo_Hori?oldid=95249"
Community content is available under CC-BY-SA unless otherwise noted.