"I don't think such a game exists, Ralph."
―Tapper

Tapper is a supporting character in Wreck-It Ralph and is the bartender at Tapper's. He seems to be one of Ralph's few close friends, and is trusted by Ralph for "never giving him a bum steer". In the story, Ralph goes to him for advice on how he can win a medal, but the bartender is at a loss of what to suggest. Tapper directs Ralph to the Lost and Found in hopes that he can find something useful there.

Later in the movie, Tapper is seen at Felix and Calhoun's wedding in the crowd of attendants.

Tapper is a real character from the arcade games Tapper and Root Beer Tapper.

Tapper is a stocky little man with short brown hair and a handlebar mustache. He has rosy cheeks, large, blue eyes, and a large, pinkish nose. He wears a blue vest over a white shirt with a high collar, accented by a red bowtie. His trousers are a deep reddish-brown. His appearance is similar to Mario.

Ralph asking Tapper were he can get a medal

Okay! As you were saying-

Tapper at Felix and Calhoun's wedding

Tapper as he appears in the original Tapper.

Root Beer Tapper as he appears in a concept art for the movie. 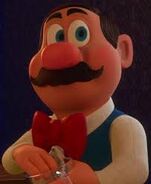 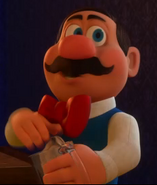 Retrieved from "https://wreckitralph.fandom.com/wiki/Tapper?oldid=105843"
Community content is available under CC-BY-SA unless otherwise noted.