Tapper's is one of the arcade games in Wreck-It Ralph. It is a bar that serves root beer to other characters in the arcade, and it is tended to by the bartender, Tapper. Ralph frequently visits the tavern to drown out his sorrows, hang out, and get advice from Tapper, who appears to be a close friend of Ralph's. It is here that he eventually meets Markowski, who is supposedly tipsy on root beer (as a reference to actual beer), and begins his game-jumping adventures.

Tapper, as well as Root Beer Tapper, are real games released by Bally Midway in 1983.

As shown in the movie, when the arcade is closed, many characters like to go to Tapper's to have a drink, or like Ralph, to just hang out. Tapper is always happy to mingle and serve the patrons their orders.

Tapper's and Tapper himself, as they appear in the original game.

Ralph in the Lost and Found closet at Tapper's.

Ralph in the hallway at Tapper's. 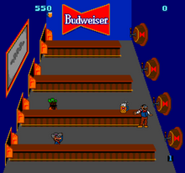 Tapper in Ralph Breaks the Internet

Ralph & Felix in Tapper
Add a photo to this gallery
Retrieved from "https://wreckitralph.fandom.com/wiki/Tapper%27s?oldid=96934"
Community content is available under CC-BY-SA unless otherwise noted.