TurboTime (denoted as Turbo Time in some contexts[1]) was the game in which Wreck-It Ralph‍'s main antagonist, Turbo, starred before abandoning his game and taking full control of Sugar Rush. A classic 8-bit arcade racing game released on May 1, 1982, TurboTime was a hit at Litwak's Arcade following its release. The game featured several look-alike characters dressed in dark blue and white, while Turbo was set apart from the rest by his red and white outfit.

Turbo eventually became obsessed with attention, pushing other racers away from him in the podium to emphasize his trophy and eventually considering himself to be "the greatest racer ever". However, in 1987 RoadBlasters was released, immediately gathering the attention of Litwak's customers due to its superior graphics and game design.

Turbo despised being thrown out of the spotlight; he chose to abandon his own game in order to reclaim his glory and the attention that he always craved. He initially interrupted a RoadBlasters race by driving his car through the background while chanting his catchphrase, but he later ran directly into the player's car; glitching the game and forcing it to crash. Both machines were considered to be out of order, being permanently unplugged by Mr. Litwak; in the process stranding their characters and giving birth to the phrase "going Turbo" in reference to game-jumping recklessly. The only character known to have escaped the disconnection was Turbo himself, who secretly reprogrammed another racing game, Sugar Rush, usurping its original ruler and adopting a different persona known as King Candy.

In December 2012, Disney released a 16-bit version of TurboTime also as Turbo-Time X, which varies greatly from the one featured in the film in both graphics and game play, as part of the Wreck-It Ralph iOS package. The player controls Turbo and the game mechanics are defined by driving at "turbo speed" from a bird's eye view and collecting coins to gather points in three-lap races, while other racers wearing different colors serve as opposition.

TurboTime being unplugged and removed from Litwak's arcade, along with RoadBlasters.

TurboTime cameo in the Storybook Deluxe

Game Over in TurboTime in the Wreck It Ralph App 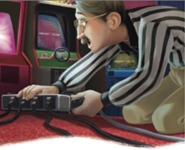 TurboTime is seen in the back. 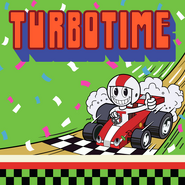 Turbo-Tastic!
Add a photo to this gallery

Retrieved from "https://wreckitralph.fandom.com/wiki/TurboTime?oldid=100127"
Community content is available under CC-BY-SA unless otherwise noted.