Ugg is one of the antagonists from the 1982 game, Q*bert. Ugg is a purple, pig-like creature with orange eyes. He can be seen, with the other characters from Q*bert at the entrance to Fix-It Felix, Jr. in the Game Central Station, where they reside due to their game being unplugged.

In the ending of Wreck-It Ralph, Q*bert as well as his enemies help out with the "bonus levels" in the game, Fix-It Felix, Jr. Ugg is a villain along with Ralph and the other Q*bert enemies.

In the game Q*Bert, Ugg and his partner Wrong Way appear in later stages to join Coily in stopping Q*Bert.  Ugg and Wrong Way continually babble gibberish words in deep voices throughout any stage in which they appear, an aural characteristic which may give players an early warning of their arrival at the beginning of that stage.

Unlike all other characters and objects in the game, Ugg and Wrong Way ignore the standard direction of gravity and behave as if either other corner of the pyramid were the top of the pyramid, with Ugg's gravity following the 120-degree rotation as he enters the field from the lower right, and Wrong Way's gravity following the 240-degree rotation as he enters from the lower left.  As Ugg and Wrong Way can thus hop and land on the other two faces of each cube, their behavior has a propensity to catch Q*Bert players off guard, should they believe that the normal direction of gravity makes them safe from Ugg or Wrong Way even as the monster is closing in for the kill.

If they fail to catch Q*Bert, Ugg and Wrong Way will eventually leap and "fall" from either side of the pyramid, usually reappearing at their respective "tops" of the pyramid soonafter. 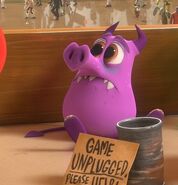 Ugg as he appears in a promotional render

Ugg and his comrades homeless in Game Central Station.

Peter Pepper offers a meal to Ugg and his companions.

Ugg and other enemies appearing in Fix-It Felix, Jr.

Ugg and Company, as pictured in the legend on Q*Bert's arcade cabinet.