Maybe this won't have to do with the wiki, but having played many video games after watching the movie, I almost had this question: If Wreck-It Ralph makes references to the videogames, Why there aren't many videogames that make reference to Wreck-It Ralph? (As like Sweet Sweet Mountain from Mario Kart 8, that looks like Sugar Rush). And this is where I show a project that I am starting to develop:

What is Randy & Manilla? 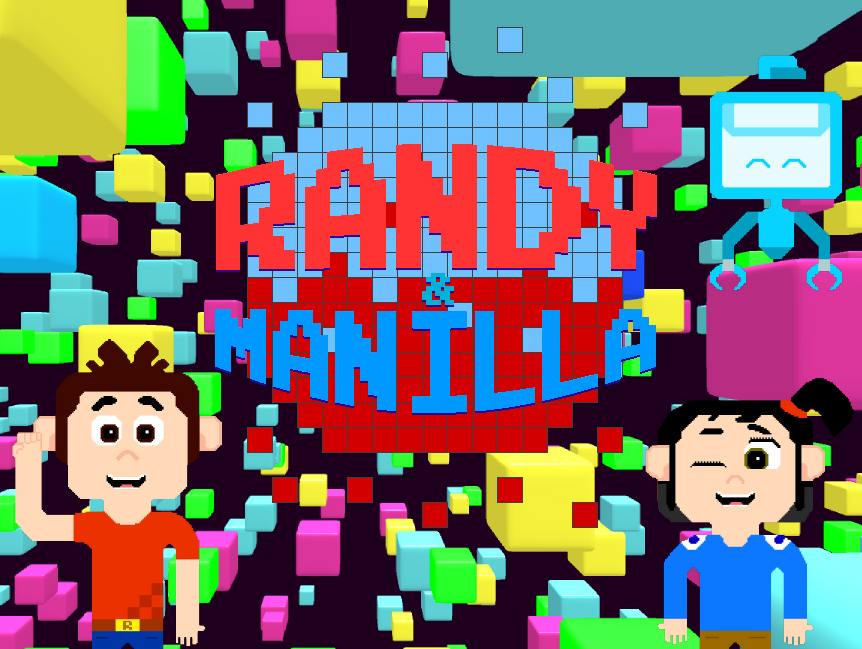 Randy & Manilla is a game where is discovered a mysterious quantum cyber-universe hosted by Net-Cubes that contain virtual worlds with various genres of games.

That is the general description of the game, but what I'm going to find out is, How much does it have of Wreck-It Ralph?

The first clue, the title, it's obviously a reference, with the pixelated font and the curved and uneven edges, Randy doesn't look so much like Ralph, but Manilla does have a great resemblance to Vanellope Von Schweetz, and the names of Randy & Manilla combined rhyme pretty well with "Ralph & Vanellope". But both have a big difference, Randy is not a bad guy & Manilla is not a princess, and less being from Disney, to avoid being an extreme dependent of their own crossover and merchandising just for singing (I didn't like this detail in Ralph Breaks the Internet), like his short biographies (although they mention similar powers):

Randy Qubit Pix-It: Bold, somewhat brave and motivated. Their power ups are of fireballs and strength, which can remove obstacles and many enemies.

Manilla Von-It: The younger sister, cheerful, optimistic. Her power ups are speed, which can run, give quick attacks and mini-teleports that pass through glass walls and fences. In a few phases it will run similar to Sonic.

Another thing that has some reference, is one of the selectable Net-Cubes, As Terra-Qubit. which is like a combination of Minecraft, Bitania (from Super Paper Mario) and even Niceland, in which they inhabit cubic beings somewhat similar to the Nice-Landers called Terra-Qubiters, whose mayor is Cubijohn Law.

Randy & Manilla also share another feature in common with Wreck-It Ralph, that of a secret virtual life inside a machine: In Wreck-It Ralph the characters live in arcade machines and on the Internet, and in Randy & Manilla live in a unique and powerful quantum supercomputer in the distant future, but the other big difference to not be a simple imitation, is in its history, which can be even darker, but I will leave you the synopsis:

On the year 2142, In the mysterious interior of the quantum supercomputer created by Lambert Wilson, there is a cyber-universe surrounded by a brightly colored cubes called "Net-Cubes" that inside have a fantastic virtual worlds of pixelated structures, abstract and even in various ways. It is free from threats like hackers, cyber-spies and corporate and government organizations. But that doesn't mean that they have their own threats, such as the villain of the red Net-Cube, "Cracksom Virus" a dominant virus that puts all Net-Cubes in danger of being permanently eliminated in their favor and expanding their empire of computing corruption.

Then a message algorithm called "E-Mailer" arrives at the world of "Bloxland Qubitown", the home of Randy and Manilla, giving them an urgent notice that the entire cyber-universe is in a big danger of being destroyed by Cracksom, urging and begging to be their heroes, and they accepted the mission and they will embark on a great adventure about the different Net-Cubes, but E-Mailer will also accompany and open them portals to access the new worlds.

If you have entered the curiosity, I leave a gameplay of the Pre-Alpha version of the game:

I also leave the download links of the pre-alpha version in case you want to play (for Win10):

Also if you want to follow me with my project, I leave a Discord invitation: https://discord.gg/UyacSFF

What do you think? Do you think the game is a reference of Wreck-It Ralph?