Why I consider it a bad proposal? 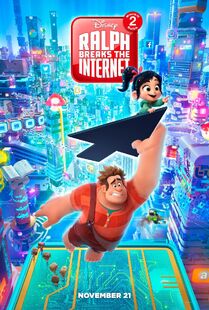 Ok, when it is Disney who makes the sequels, especially on the animated films, they always have a childish argument of poor quality or regular sometimes, and Wreck-It Ralph it isn't the exception, a movie that was supposed to be one of the best sequels, but since it's Disney, it always comes out of its own making hoaxes like these.

I'm going to define in several steps why this movie is being a bad proposal:

1. Shows Internet in a null way

The idea of adding Internet in the movie hasn't been a bad idea, it was an interesting and modern concept. But the problem is that they are so using only as an ornament with numerous brands and websites (among them Google, Facebook, Twitter, Amazon, etc.) with brief appearances, that thinking about it well isn't necessarily a bad thing, since if the protagonists enter in excessive websites, it ends up like the Emoji Movie (that is looking like that). But the real reason that because the Internet is being an ornament in the movie, it's because they are wasting much of their time dedicated for the movie for a scene (that we will talk about in step 3) and losing time for enemies based on the dangers for the Internet (virus, clickbait, cyber-espionage, lack of net neutrality, etc.) that the protagonists must face to reach their final objective: The patch piece for Sugar Rush.

As you know, the first movie, Wreck-It Ralph, is based on the videogames, mainly arcade games, with cameos from numerous characters from this industry as Bowser, Sonic The Hedgehog, Dr.Eggman, Q*Bert, Pac-Man, etc. Ralph Breaks the Internet instead, is based on the Internet, which is much bigger and more complex than the videogames, and they aren't the only thing that has, and his interior stage in the form of a big futuristic city, it also gives a representative aspect to the numerous web pages. But the problem is it's because they haven't also included the online videogames (Flash, HTML5, MMO & Smartphone gaming), which are also an important part of the Internet, since if they haven't included the references of these games, basically they are taking away the legacy of their predecessor.

They could have put suitable references for the general public with simple games similar to Tetris, Minecraft, Angry Birds, Cut & Roap, Pou, etc. But the truth is that it isn't like that, and we only had in the teaser a single simple online game (The Bunny Pancake & Kitty Milkshake from the Baby Moana's tablet). Mario was going to be included as a cameo in the sequel because they couldn't include it in the original movie, but for the sequel the producers of Disney in the end have discarded, because they aren't longer interested, the filtration of IMDb that Charles Martinet (Voice actor of Mario) participates in the voice cast was finally false.

3. Excessive importance of the presence of Ohmydisney

Was it really necessary to put the rest of Disney and its acquisitions in the movie? So good has this inclusion been? the answer is, not entirely. They just put it for the greed of money, lack of creativity, and a way to satisfy the fans more "at heart" (but the truth they are more stupids) and do unnecessary stuffing if it's possible to last up to 60% of the movie. I'm not saying it's bad to have some winks and easter eggs from the other Disney things, since all movies have it (include the Mickey icon). But here they have gone too far, and they have put it as if it were the great newness, when in reality it isn't as new as it seems, many characters from Disney, Pixar, Marvel & Star Wars are contrasted with each other, and the inclusion of Wreck-It Ralph in Disney's all-star products is not recent. Since every successful character or movie is always welcome in Disney's all-star products, that basically we have already seen Ralph's contacts like this with other characters in Disney Infinity, Crossy Road, Battle Mode, Kingdom Hearts 3 & fanarts.

The presence of Ohmidisney Like most the great part of the movie, it easily becomes a Disney commercial film, instead of ordinary Disney movie. Causing you to lose the main focus and you don't know how to call if it's Ralph Breaks the Internet or Ralph Breaks Disney? It's the ultimate proof that the Disney characters are so dependent on the extreme of crossovers of themselves, that their sequels and spin-offs are the reason for being so bad.

4. The appearance of the princesses have overshadowed the focus of the film and Wreck-It Ralph himself

Why the movie also includes the "Disney Princesses"? Why reason? for a very stupid reason, Vanellope is also a princess, even though she is also president, and both Disney and their fans have wanted to ignore this part. It all started at the end of the first part, when it was revealed that way, and according to the general rule of how to classify: Every woman who has been singing, with magic, speaks with animals, who was kidnapped or enslaved and whose problems were solved by men in the film, is classified as "Disney Princess" and it is mandatory to be in the merchandising group with the other princesses, and all were like that, with the exception of Mérida, that was classified with the real reasons of being a princess (being the daughter of the king or emperor, and several of the others also).

Vanellope luckily it's from the secondary part, since in his original film he had a different essence and his world, Sugar Rush, is a videogame and not a fairy tale. But now with the accidental contact with the princesses, that spark has been lost and turned off, and it all started with the fandom, with many fanarts of this type, in Disney Infinity having contacts with a few princesses in a personalized way by the players, they have done so much fandom of Vanellope with the "Not-Original princesses" that has already become official in Ralph Breaks the Internet, and now has the risk of being turned into an "official Disney princess", and she has lost everything that made her really, and is forgetting: The glitch racer of the game Sugar Rush & the best Wreck-It Ralph friend, starting this way a vicious circle of bad merchandising and endless fandom with all the princesses 24 hours a day (annoying and ridiculous if it's in excess, a little bit isn't so bad).

Of all the steps that we have tried about Ralph Breaks the Internet is a bad proposal, this is the worst and the one that lowers the quality of the film compared to it's predecessor.

What would have been better to continue the Wreck-It Ralph franchise?

Well in my opinion, would make more sense than the respective games of Wreck-It Ralph as Fix-It Felix Jr., Hero's Duty & Sugar Rush they were sub-franchises for the same instead of being simple promotional games on the online gaming websites and becoming obsolete and deleted in 2 or 3 years, even so, they would reflect better the true essence of the film: The videogames.